I want to provide a little context of where this investigation sits for me in terms of my own practice. I’m currently undertaking a project entitled 12anomalies, which is focused on producing 12 visual shorts in the 12 months of 2013. Elements of work produced for this fringe exhibition will form the basis of march#3, in preparation for exhibition in April. It became apparent quite quickly that the core concept of 12anomalies, (with the intention to enforce creativity, in spite of the daily grind), is about escape, breaking free of enforced trappings and surroundings. For me, this seems to chime with the expansive idea of agoraphobia.

On further reflection, I seem to have some sort of subconscious fascination with isolation in my video work; the idea of loner-ism and that want to be alone. This is clear in my short, Port, which deals with dissociation from time, and (unknowingly) links to depersonalisation, which seems closely associated with agoraphobia. (http://bit.ly/YkK4bj)

This investigation not only allows for the creation of new work, alongside enforced limitations and themes, but for exploration into personal motifs that are apparent in my work.

Initial idea development has fed from recent interest in the work of JG Ballard, supported by Tacita Dean’s responses to Ballard, and furthermore, her championing of celluloid film. The fear of loss of something, the demise of an aesthetic, with the digital landscape of cinema serving as the wide open field Dean is unwilling to step out into. This is one tangent to follow.

Ballard and Dean have subconscious links to the first two pieces in the 12anomalies project.

In february#2, we deal with a hopeful escape from a monotonous and grey descent, repeated but changed by colour and inspiration.

january#1 looks at an abstract response to that old rope of family, dealing with a transition of time in its content, but also aesthetically – through physical manipulation of celluloid, textured and inked, before digital manipulation in post-production.

Time to get down to some further reading, viewing, sketching, noting…The Green Ray by Rohmer, Radio On by Chris Petit. Some ideas have been formulated, spaces have been identified, and they will find there way onto here in due course. I can see my research going off on a number of tangents, but I can begin to see the connections that will allow me to loop back in line with the brief.

Initial thoughts on agoraphobia – the old cliche fear of open spaces, but feelings of it being more than that, of loss or lack of control, inability to escape, further reading indicated ‘a fear of return’, with the possible paradox of claustrophobia, the depersonalisation of the CCTV monitor interests me…loss of contact with personal reality, fear and avoidance.

Shot the source video for the piece today, it will be heavily reliant on the post-production to achieve what my intentions, but I’m reasonably happy considering the time available to me at the moment. Initial reflection is that I might not have gone wide enough with my lens selection, not because I don’t like the composition, but because it may have to sit on a 4:3 television set. Filming was only short but relied on a very physical performance, mixed with understatement, from my actor. Very pleased with the performance. Looking to have a rough teaser together by end of the month. Planning to update on here more consistently, with inspirations and evidence of idea development over the Easter Break.

Need to consider the technical issues of linking a looping playback unit to an old monitor such as this…any ideas? 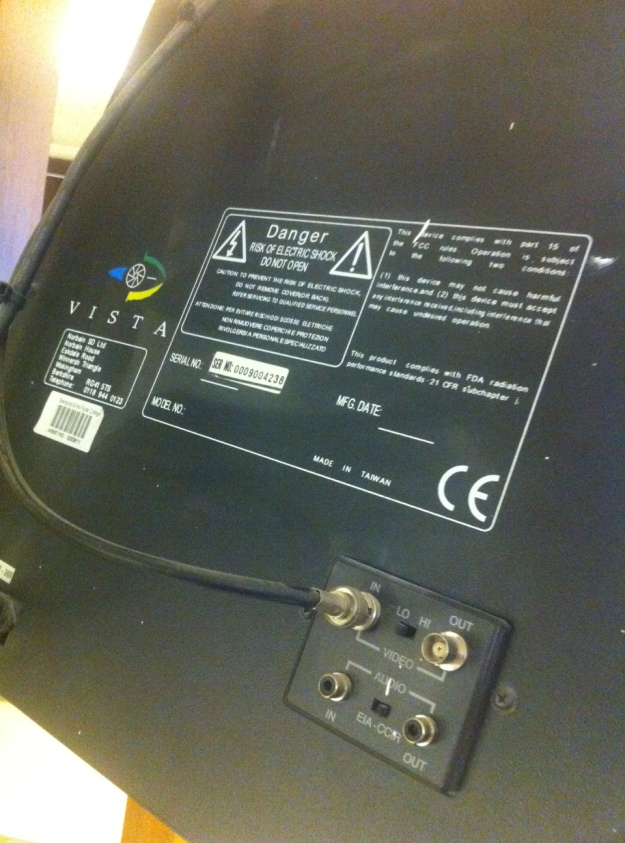 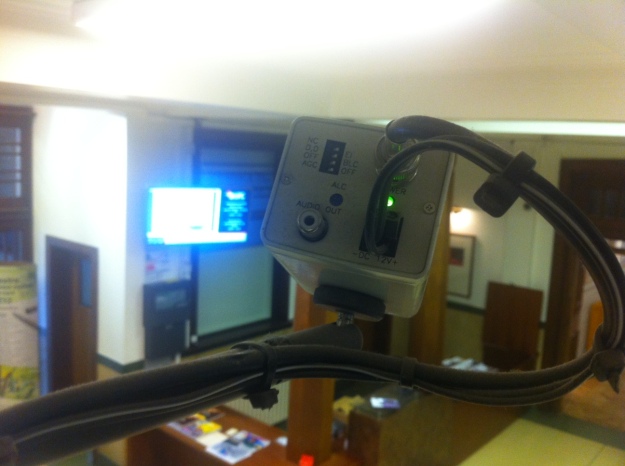 “If you look at the image attached, my piece will focus (hopefully) on using the old CCTV unit in the old reception. I’d like to have a looping video on there, with a view to catching people’s attention only fleetingly. The easiest piece of the footage will be you walking to and fro, door-to-door in that reception area, as if on CCTV. Where you can be quite free with it is with a physical response to not walking normally to and fro, you might address the camera, wave for help, be unable to enter one door over another. There will be no audio or dialogue so it will be a complete physical response. Have a look at some of my influences for the project and give a bit of time to things before Wednesday, I’m quite happy for you to be free with it and come with ideas but I’ll also direct further if it’s not as I want.

The theme is agoraphobia, I’m taking that as the fear of not knowing how to get out of something, I also looked at something called depersonalisation. I’ve been quite influenced by the work of JG Ballard, a writer. His science fiction visions are very much of the present, effectively could happen tomorrow.

“JG Ballard’s influence on the cinema is elusive, indirect, glimpseable at the margins. Perhaps searching for a –Ballardian cinema in ordinary terms is obtuse: we should be looking instead at CCTV footage taken from any shopping-mall security camera, or the Big Brother daytime live feed, or one of the direct-impact 9/11 World Trade Centre plane-crash shots – avidly consumed on YouTube, but now considered too brutal for television.”

“He kept asking: what effect does the modern setting have on our psyches – the motion sculpture of the highways, the airport architecture, the culture of the shopping mall… and technology?”

Also, Tacita Dean is an influence, an art filmmaker whose work is a series of passes and returns, memory and meaning.

As extreme as this following video is, his actual physical response to not being able to get somewhere is hilarious but also physically unnatural. One approach might be imagining a physical barrier in front of a doorway, when there isn’t one.

Let me know if any issues with this or filming on Wednesday, ideally I need to record before Easter, or if none of this makes sense, just want you to get a feel for the ideas and bring something fresh of your own to it. You need to get into a character of your creation, with this as your influence.”

Thank you to Dale…following filming. 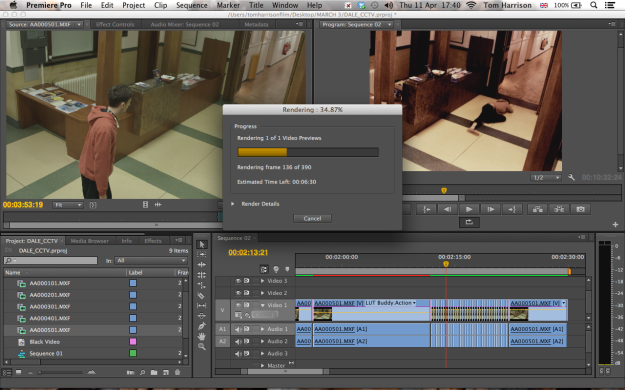 The end of this process has been very much a technical pursuit, an instinctive and relatively basic edit reliant on old technology as a platform. It’s certainly been strange revisiting old formats to create a certain aesthetic.

Initially, as outlined in earlier posts, issues with powering the unit led me away from using a device that I’d already identified earlier in the process, a device that would take SD or CF cards and loop the content. I exported, I burnt DVDs, I looked on some terrible websites at some strange convertors, recorders, etc.

On closer inspection of the TV unit it was identified (with the help of others) that the unit would be fine if we could power. Video-wise it was a simple BNC connector to a video component lead. Following confirmation from the Estates team, power was kindly arranged by Aaron. The TV itself is dying, if anything it’s actually lost its focus, on its last legs, I’m hoping it will add something to the film, not take away. On installation, it feels like the CCTV camera that was originally on there, which keeps some authenticity intact. The device itself is dated and is only able to deal with MPEG2, it took some reverse thinking to get back to that with the help of a friend. It loops as needed, I just hope it doesn’t overheat in the time it is up there…will check and remember to switch off at weekends, (call the next exhibition OCD).

Always important to allow that time to troubleshoot. This site-specific experiment was an important experience for me, raising different barriers to overcome than I’m used to.

(Note: Many thanks to Illustration BA student, Ann, who has kindly granted permission for her back to be in it.)

People I’ve described it to sound intrigued. I’d like to document it with a slow tracking shot through the corridor space, and also, if time, somehow, covertly or by using motion detection, capture people’s reactions. We’ll see…

(Note: it was installed and looping on Friday 26th April. That afternoon I walked past to find students discussing what they’d just seen…I hope this continues.)

This has been a loose connection, a dipping of the toe, but it will likely form further connections and discoveries. It was an experiment in which the things I’m comfortable with, were the least pressured, the least considered. Very simple, very basic techniques. Elements of my research, came about through this project, but weren’t necessarily developed. These elements will continue to develop and I see this process as a starting point for bigger ideas.

There was some contradiction of shooting on a fantastic camera (C300) to bring the image down to this quality. However, the saying of ‘the best camera is the one you have with you’ applied here (it was sat in my office) and actually gave me a lot of freedom in reframing in the edit consistently.

There were reasons behind the edit selection…I’m not expecting people to stand and watch. I’m hoping they will catch a glimpse of something they are not sure about, maybe after walking past five or ten times.

I like the idea of the looped frames, it seems a trope of recent genre films, a staccato-effect, of some horrific images. Further development might play with this further, but maybe with real life events??? (Keep thinking of Michael Haneke’s Hidden)

What do I want people to feel? How do I want them to react? There’s fun in the fact that someone might walk past 20 times a day and never see it. I want that too. I like that. It’s the small details, not the grand idea of ‘Big Brother Is Watching You’, that I’m hoping to capture.

Here’s the video…but please, if you can, see it in its site-specific location. It’s geared as an edit to look a certain way on a certain, old television. I’ll document it through stills and video during its exhibition.

Statement and bio for the catalogue…

Agoraphobia: a Ballardian way to escape.

The CCTV camera interests me…with its notions of fear, avoidance, control (or lack of) and the inability to escape.

This has been an opportunity to reflect on a subconscious fascination with isolation in my video work. Dissociation from time and (unknowing) links to depersonalisation loosely connect to the theme of agoraphobia.

I am not expecting people to stand and watch, but I am hoping they will catch a glimpse of something. There is fun for me in the fact that someone might walk past twenty times a day and never notice. I like that. It is the small details, not the grand idea of ‘Big Brother Is Watching You’, that I am hoping to capture.

This was an experiment in which the processes I am comfortable with were the least pressured, the least considered. An instinctive, basic application of technique. A rehashing of formats that pushes obsolete technology to pursue a certain aesthetic.

I see this as a starting point for bigger ideas.

“JG Ballard’s influence on the cinema is elusive, indirect, glimpseable at the margins. Perhaps searching for a Ballardian cinema in ordinary terms is obtuse: we should be looking instead at CCTV footage taken from any shopping-mall security camera, or the Big Brother daytime live feed, or one of the direct-impact 9/11 World Trade Centre plane-crash shots – avidly consumed on YouTube, but now considered too brutal for television.”

There seems to be a subconscious desire within my work to negate the dominant and the mainstream, which is possibly at odds with my desire to succeed. Enforcing creativity in spite of the daily grind.

A Ballardian way to escape…documented.